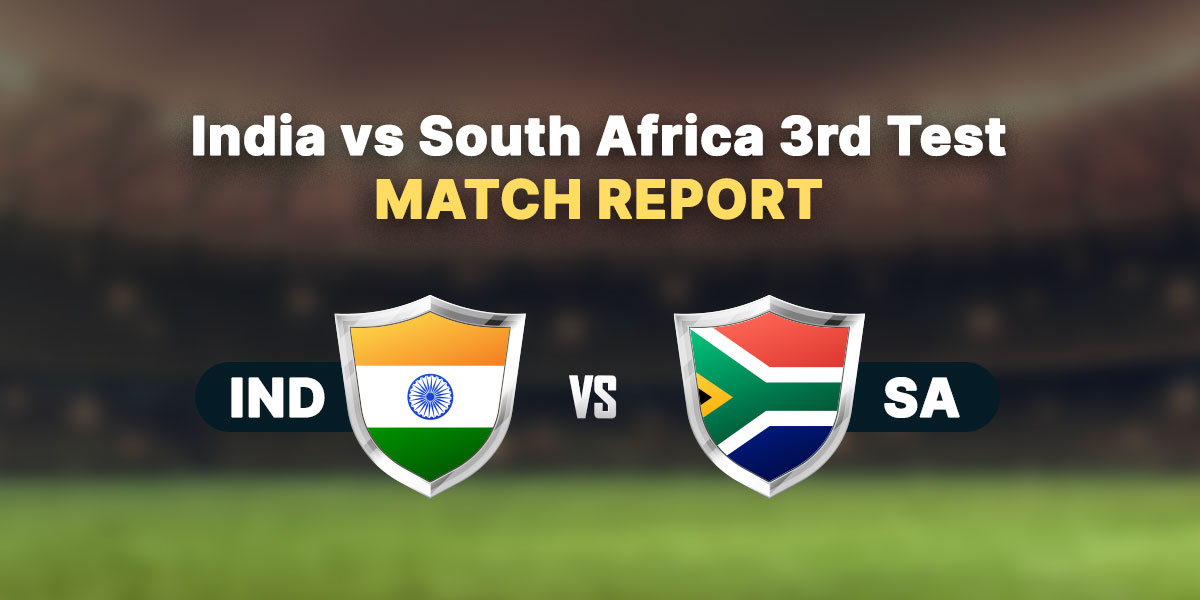 The sixth-ranked South Africa completed the demolition job against India, the world No 1 side in Test cricket on Friday, in the third and final Test at Newlands, Cape Town, by a huge margin of 7 wickets courtesy a strong batting performance led by the young and  inexperienced Keegan Petersen, who was deservingly named the Player of the Match as well as the Player of the Series for the Freedom Trophy 2021-22.

South Africa began the fourth day of the third Test needing another 111 runs to win and with a question of eight wickets in hand. While India were expected to come hard at a young and inexperienced South African batting line-up, absolutely nothing worked in the favour of the visiting side whose fast bowlers Jasprit Bumrah Mohammad Shami produced an incredible spell of fast bowling at the start of the fourth day, but could not break through.

And by the time India did manage to get the first and only wicket to fall in the day — Petersen falling for 82 to Shardul Thakur — South Africa had set themselves up nicely to record a series victory against one of the strongest teams in Test cricket, while maintaining their impeccable record at home which was certainly under danger.

After all, India had entered the Freedom Trophy 2021-22 with the sole aim of winning their first-ever Test series in South Africa. India had began in a spectacular manner by winning the first Test by 113 runs at the SuperSport Park in Centurion, and it looked like the hosts, who are in a transitional phase, would not stand a chance against a rampant visiting side.

But for what they have achieved, South Africa must be credited and praised for sticking to their guns, showing deep sense of self-belief, exploiting their knowledge and habit of playing in favourable conditions, and more importantly, not letting India get away from them at any stage in the last two Test matches.

South Africa are yet to start producing big scores with the bat which meant that their bowlers had to keep India under 250 — a score that the Proteas team can manage even against one the best bowling attacks in the world.

India’s target of 212 was achievable on any pitch and in any condition.

Having removed their biggest threat in the form of South Africa captain Dean Elgar who stood tall against their hostile bowling line-up in the second Test at Wanderers in Johannesburg, India were hopeful to get early wickets in quick succession on the fourth day and apply pressure on the young South African players. However, Petersen not only absorbed all pressure with spectacular technique and application against the likes of Bumrah and Shami, but also collected runs with ease against one of the world’s best spinners in Ravichandran Ashwin, displaying his array of strokes all around the park.

A crucial 78-run stand between Elgar and Petersen had provided South Africa a platform to build on on the third day, and the same was done by the pair of Petersen and Rassie van der Dussen when they came out to bat on Friday. The two batsmen added 54 runs for the third wicket to take South Africa closer to the target of 212 set by India, and victory was accomplished with another strong and unbeaten 57 run stand for the fifth wicket between van der Dussen and Temba Bavuma.

While the Indian bowlers tried their best on what looked like a pitch favourable to batsmen as well, they were certainly outplayed by the determination and doggedness shown by the South African players.

India captain Kohli revealed later on that one of the factors which separated the two teams was the height of the South African bowlers, who were certainly able to generate a lot more pace and bounce by putting balls in the same area which the Indians did but could not find similar return, especially bounce.

But the biggest factor which separated the two teams was is the lack of runs from specialist Indian batsmen, particularly Cheteshwar Pujara and Ajinkya Rahane who both disappointed generally in the series.

There 111-run stand in the second innings of the Johannesburg Test was indeed a reminder of what these two senior batsmen can bring to the table with their experience and expertise, but given that both Pujara and Rahane play only one format for India, a lot was expected from them if India were to win their first-ever series in South Africa.

India vice captain for the tour, KL Rahul started off with a brilliant century in the first innings of the opening Test, while Rishabh Pant scored only the second and last century of the series in the final Test. For that matter, South Africa clinched the series 2-1 without any of their batsmen having scored a century. The highest individual score was from Elgar in the second innings of the second Test and beaten on 96 to help South Africa level in the series.

India's performance with the bat certainly kept slipping consistently from the time they made 327 in the first innings of the opening Test. Since crossing the 300-mark, India recorded figures of 174, 202, 266, 223 and 198 in the following five innings across three Tests.

The two teams will now get a short break before they meet again at Parel on January 19 for the first ODI, where the second ODI will also be played, on January 21. The third and final ODI of the three-match series will be played at Newlands in Cape Town on January 23.