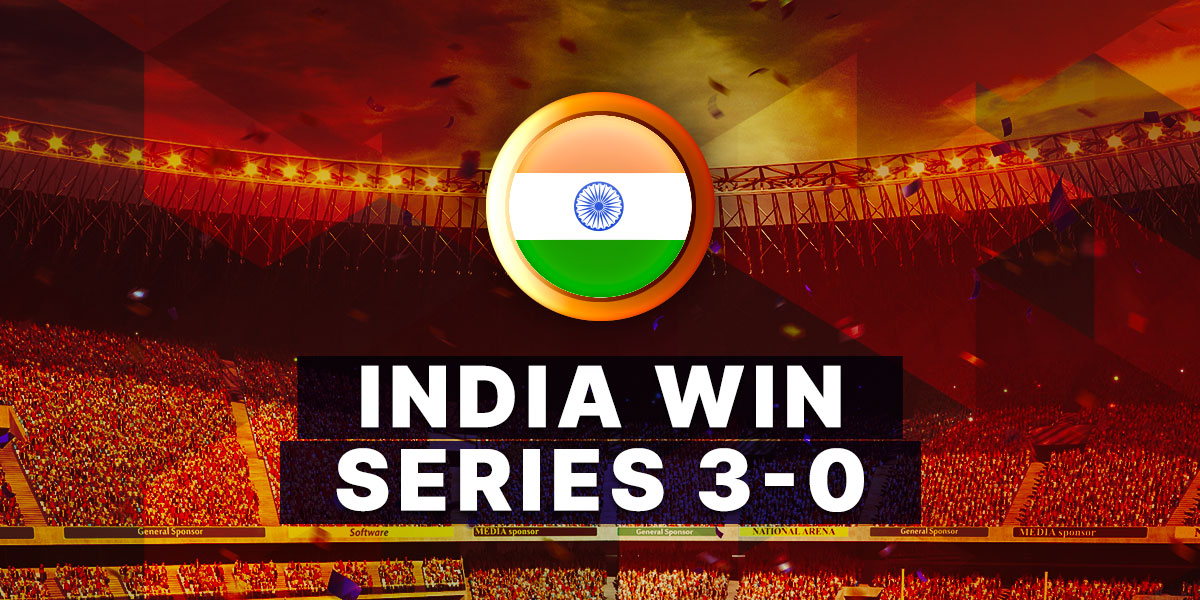 India continued with their ruthless juggernaut to hammer New Zealand by a massive margin of 73 runs in the third and final T20 International, played at the iconic Eden Gardens in Kolkata on Sunday night, to take their series 3-0 with dominant performances across the department.

The victorious Indian team obtained the similar result that it had from the first two matches of the series, albeit in a different manner, after electing to bat first knowing that the heavy dew conditions later on in the contest will make their job difficult. But India met the condition of putting up a big score on the board, as a superb half-century from their captain Rohit Sharma and vital performances from the other batsmen had them put on a daunting total of 184/7 in their 20 overs.

In reply, the new formed partnership of Patel brothers in Harshal and Akshar ran through the New Zealand side, sharing five wickets between them, to hand India a massive victory as the Kiwis were bowled out for 111 in 17.2 overs, in what turned out to be a hapless performance with the bat a side which is not known for throwing in the towel easily. It was indeed a surprise to see New Zealand being rolled over after they produced impressive cricket in the World Cup to reach the final.

The 3-0 victory in the T20I series certainly puts India back in the top echelon as one of the strongest teams in the format, particularly when they are facing a formidable opponent in New Zealand who have time and again caused them a lot of worry.

But at the same time, this outcome under the new captain Rohit and coach Rahul Dravid certainly brings back thoughts of what impact and difference could India have made, had they had a better day on October 31 against New Zealand in their Group 2 match of the Super 12 stage in the T20 World Cup.

It is also important to revisit that loss to the New Zealand side —  which went on to play in the final of the tournament — simply because of the fact that the Kiwis have troubled India a lot in Cricket tournaments over the last two years. Keeping the loss at Dubai aside, India have been absolutely dominant and ruthless when it comes to playing T20Is against New Zealand as their current record states 8 wins from last 9 matches.

Additionally, India have become the only team to have inflicted  two whitewashes over New Zealand in the shortest format.

The victory was set up for the Indian team by their captain Rohit, who went on to smash get another half-century in the format. Rohit also went past V Kohlii to record most scores — 30 — in excess of 50 in T20Is. Rohit faced 31 balls to smack three sixes and five boundaries as he went on to make 56, which was the highest score by any batsman from either team.

India had a new opening pair in Rohit and Ishan Kishan as they had rested vice-captain KL Rahul and Ravichandran Ashwin from the contest. Kishan looked in ominous form but his innings was cut short by the stand-in New Zealand captain Mitchell Santner, who was leading the team in absence of Tim Southee.

Rohit and Kishan added 69 runs from 6.1 overs to set the tone in favour of the Indian team. Even though New Zealand struck back immediately with the wickets in form of Kishan, Suryakumar Yadav  (0) and Rishabh Pant (4), the likes of Shreyas Iyer (25) and Venkatesh Iyer (20) helped the team to get back on the track.

India also did not look like finishing with a score in excess of 180 until the pair of Harshal and Deepak Chahar got together in the middle. Harshal and Chahar both smacked two boundaries and a six as each to make 18 and 21* respectively, and put India's total at 184/7 in 20 overs.

For New Zealand, their stand-in captain Santner had a memorable game with the ball as he returned with figures of 4-0-27-3, whereas the others in Trent Boult, Adam Milne, Lockie Ferguson and Ish Sodhi all claimed one wicket apiece.

New Zealand's reply with the bat was all about a half-century from there in-form opener Main Martin Guptill. The right-handed opener waged a lone battle for the Kiwis, clobbering four sixes and as many boundaries to make 51 from 36 balls while the other batsmen let the team down. Mark Chapman and Glenn Phillips were both dismissed by action for ducks after Akshar had taken Daryl Mitchell (5).

Chahal accounted for his friend Martin Guptill as at 69/4 in 10.3 overs, the game looked beyond New Zealand’s reach. New Zealand were further disappointed when the likes of Tim Seifert (17), James Neesham (3) and Santner (2) could not contribute enough to their liking. Ferguson hit two sixes towards the end to make 14 from eight balls but his effort came in a losing cause.

Akshar returned with impressive figures of 3-0-9-3 whereas Harshal was once again impressive with his skills to return with 3-0-26-2. While Bhuvneshwar Kumar remained wicketless, the others in Deepak Chahar, Chahal and Venkatesh Iyer all claimed one wicket each.

India and New Zealand will get a gap of three days to travel to Kanpur and prepare for the first Test of the two-match series starting on November 25. These two Test matches, of which second and final will be played at the Wankhede stadium and Mumbai, are a part of the new World Test Championship cycle 2021-23.

While India will be without their regular captain V Kohlii, Rohit Sharma will continue to lead the side whereas New Zealand will have some of their key players in Kane Williamson and Kyle Jamieson back and available, after being rested from the T20I series.