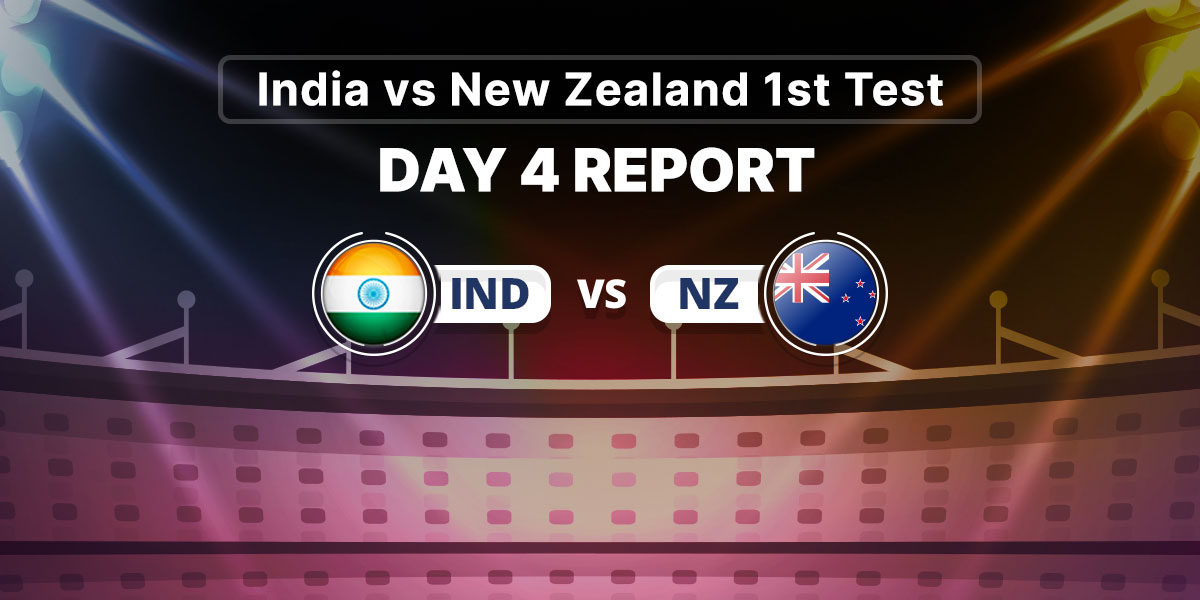 India had drawn first blood in the form of resolute New Zealand opener Will Young in the first four overs that were bowled in fading light on Sunday evening at the Green Park Stadium Kanpur, to reduce the visiting side to 4/1 chasing 284 to win the opening Test of the two-match series.

Shreyas Iyer created history with his splendid knock of 65 which followed a brilliant 105 in the first innings, whereas Wriddhiman Saha contributed with a vital 61 which helped India put on a strong total on board against New Zealand. The lower order resistance was crucial for India on the fourth day of the first Test given that their most experienced batsmen let them down once again.

After batting inexplicably slow in the first innings wherein he garnered 26 runs from 88 balls with two boundaries, Cheteshwar Pujara tried to show his aggressive side of batting in the second innings. The right-handed India No 3 had already had a couple of boundaries on the third day evening, but on the fourth, he could not add more than one boundary to his overall tally.

On a placid, largely spin-friendly wicket, the lanky New Zealand all-rounder Kyle Jamieson surprised Pujara with a sharp bouncer on his body, which the Indian could not fend of adequately well. The ball brushed his gloves and settled in the hands of Tom Blundell, which marked the start of a mini collapse in the Indian ranks.

New Zealand spinner Ajaz Patel had to resort to bowling negative line and length on the opening day when he bowled a lot of overs. But on Sunday, success came his way without putting in too much of hard work as he pinned India's stand-in captain Ajinkya Rahane (4) in front of the wickets to force a straightforward decision in the contest.

With the experienced Indian batsmen Pujara and Rahane combining for a grand total of 26 runs at a stage when India had taken only 49 runs as lead in the first innings, the responsibility of providing both — resistance and runs — fell on the shoulders of the young Iyer at No 5.

Iyer had earlier bailed India out of trouble in the first innings after both Rahane and Pujara had fallen, assessing the situation extremely well to produce a knock of highest quality which was induced with both precision and aggression. The right-handed debutant batsman continued to make giant strides as he stabilised India's innings once again, this time in the company of senior all-rounder Ravichandran Ashwin, as the two added 52 runs for the sixth wicket to bail India out of trouble.

Ashwin once again outscored both Rahane and Pujara as he followed up his 38 in the first innings with 32 in the second, which came from 62 balls with the help of five boundaries. He was dismissed by Jamieson when the Indian all-rounder chopped one onto his wicket to mark an abrupt end to the partnership between him and Iyer.

The dismissal of Ashwin brought Wriddhiman Saha to the crease as India continued in the same passion. Iyer and Saha added another 64 runs for the seventh wicket, which also witnessed a Iyer creating history in the annals of Indian cricket.

With his knock of 65, for which Iyer faced 125 balls and hit boundaries and one six, he became the first batsman from India to have scored a century as well as a half-century on Test debut. He looked set for his second century of the game but a loose shot on a short delivery from Southee led to his dismissal as a Iyer was caught behind.

The dismissal of Iyer brought Axar Patel at the crease. The all-rounder did extremely well to reach 28 not out from 67 balls with the help of two boundaries and one six, adding another 67 runs for the eighth wicket with Saha. The India wicketkeeper-batsman Saha, who once again failed to keep the wickets later on the day due to stiffness in his neck, showed no discomfort as he scored a vital 61 from 126 balls with four boundaries and a six to hold Indian innings together.

With another 280 runs to win in 90 overs on the final day and the pitch yet to break down or favour the spinners adequately, New Zealand will fancy their chances of having a good batting day at the Green Park Stadium in Kanpur on Monday where they have made the Indians work hard for wickets.