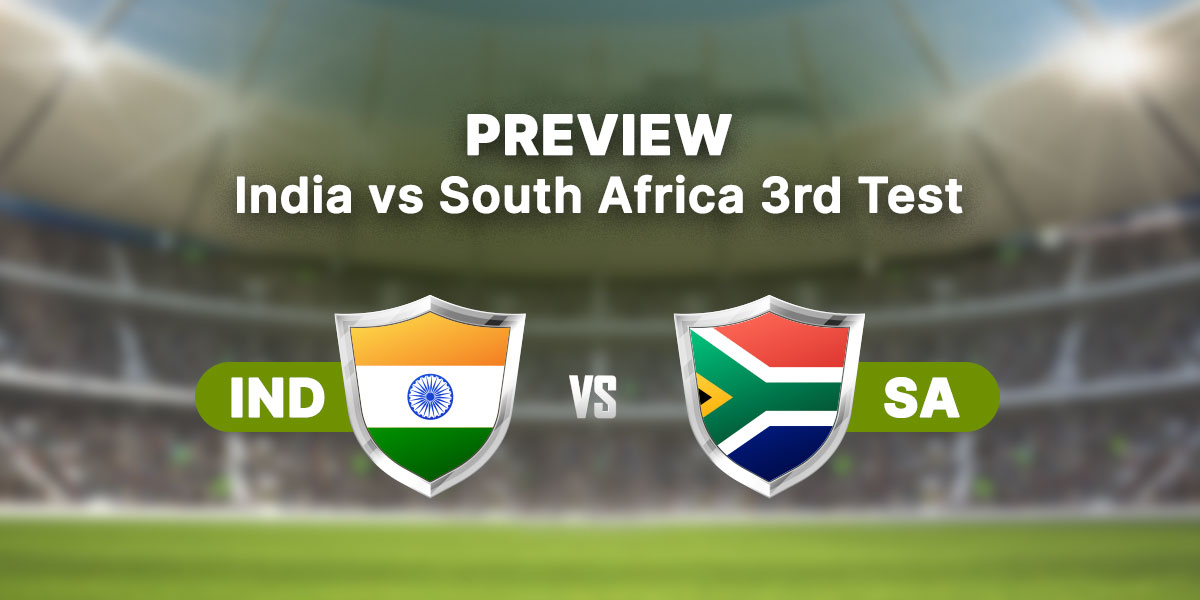 It is expected that the first day of the third and final Test at Cape Town will witness some amount of rain while it will remain partly cloudy on the remaining match days. The humidity levels will keep on increasing consistently as the game progresses, with the last two days recording a humidity percentage of more than 80%. The temperature will be around 27° C on an average with a height of 31°C on the third day of the match, that is, on Thursday, January 13.

The pitches in South Africa are favourable to bowlers in general as it has been witnessed in both the matches so far. Only one side, India, that too in just one innings, was able to go past the 300-run mark in the first two Tests and nothing different can be expected from what looks to be frail batting units in both the teams. While South Africa have done well to bounce back from their crushing defeat in the first Test, Indian batsmen are yet to show up and produce a unified effort which might set the platform for the team to record their first-ever series victory in the rainbow nation. Adding more to the bowling strength will be the right approach for this contest while keeping in-form batsmen such as KL Rahul and Dean Elgar in the side.

The Indian touring party landed in South Africa with the dreams of winning their first-ever Test series in South Africa. But all that was proven ‘easier said than done’ after their crushing victory in the first Test which they won by 113 runs. South Africa came back hard at India both with the bat and the ball in the second match at Johannesburg to breach their fortress in Wanderers. South Africa also reestablished the fact that teams tend to do well in their home conditions and they are not to be taken lightly, for what has presented them as an opportunity to beat the world No 1 team India once again in their backyard. On the other hand, India will be hurting from the defeat in the second Test by 7 wickets and would certainly be expected to take corrective measures for such an outcome. However, this leadership group has inexplicably continued to back misfiring seniors and Cheteshwar Pujara and Ajinkya Rahane, whose contributions were evidently not enough in the second Test. Hence, selecting a playing XI for fantasy cricket for this contest is certainly a tricky job.

MORE INFORMATION: India captain Virat Kohli is expected to make a return to the playing XI at the expense of Hanuma Vihari, who batted bravely particularly in the second innings of the Johannesburg Test. While India are not to tinker with their batting attack, they would still expect big runs from their senior most batsmen Pujara and Rahane who have continued to misfire for a long time. India could be forced to make a change in their bowling attack with Mohammed Siraj suffering a hamstring strain in the second Test. If Siraj is not available for the final Test, Umesh Yadav is favoured to be named as a replacement. South Africa, on the other hand, will certainly be pleased with their all-round effort at Johannesburg but will expect more from their batsmen, particularly vice-captain Temba Bavuma who has failed to convert his half-centuries into big scores on a consistent basis.

Players’ form: Pujara and Rahane rescued India in the second innings with their rapid 111-run stand for the third wicket which came from only 23-odd overs – a partnership which not only revived memories but re-explained why these two senior most Indian batsmen continue to get unwavering support from the team management, particularly while playing overseas. However, both Pujara and Rahane would know that only a century would shut their critics and put India in a position of command. For South Africa, Elgar has been a warrior with the bat but they would certainly want more contributions in form of runs from the likes of Aiden Markram, Bavuma, Rassie van der Dussen and even their wicketkeeper-batsman Kyle Verreynne. The Proteas side will also be pleased with the return to form for Kagiso Rabada, who bowled ferociously in the second innings at Wanderers.

Changes in squad (if any): YES

India will face a stern challenge from an inspired South African cricket team when the two teams face off in the third and final Test from the Freedom Series 2021 at Newlands, Cape Town, starting on Tuesday, January 11.

For a team which landed on the South African shores eyeing their first-ever series victory, it has been a tour of mixed results so far. After India started off with a huge 113-run victory at Centurion, out playing South Africa in all departments, the home team bounced back incredibly well in the second Test to breach India's fortress at the Wanderers Stadium in Johannesburg and level the series one-all.

The third Test, starting at Newlands in Cape Town where India have a poor record to show, will serve as a series decider — no surprise in saying that the hosts have their tails up and are eyeing a series victory against the world's top-ranked Team India. However, it would not be easier for South Africa to replicate their performances from Johannesburg, where their captain Dean Elgar engaged in a lone battle with the battery of Indian fast bowlers.

Elgar produced a staggeringly brave knock of 96 not out in the second innings to anchor South Africa's chase of 240, which they achieved at the loss of only 3 wickets. Elgar took several blows on his body and so did middle-order batsman van der Dussen, who returned to form with a fine 40 on a tough wicket which had unpredictable bounce and movement from the surface as the game progressed.

For India, it will be imperative for the other batsmen to contribute beyond the opening pair of KL Rahul and Mayank Agarwal. While Pujara and Rahane did well to score fighting half-centuries in the second innings, India would know that their contributions were not enough to bail the team out of trouble completely. Another 100 or more might have averted South Africans from setting off to chase the target that India set.

While Kohli is expected to make a comeback after missing the second Test due to an upper back spasm, presumably in the place of Vihari, the right arm fast bowler Siraj is struggling with a hamstring injury and might be replaced by right-arm fast bowler Umesh Yadav.

In the South African camp, there are no injury concerns as they will look to be consistent and replicate all that they did right at Johannesburg.