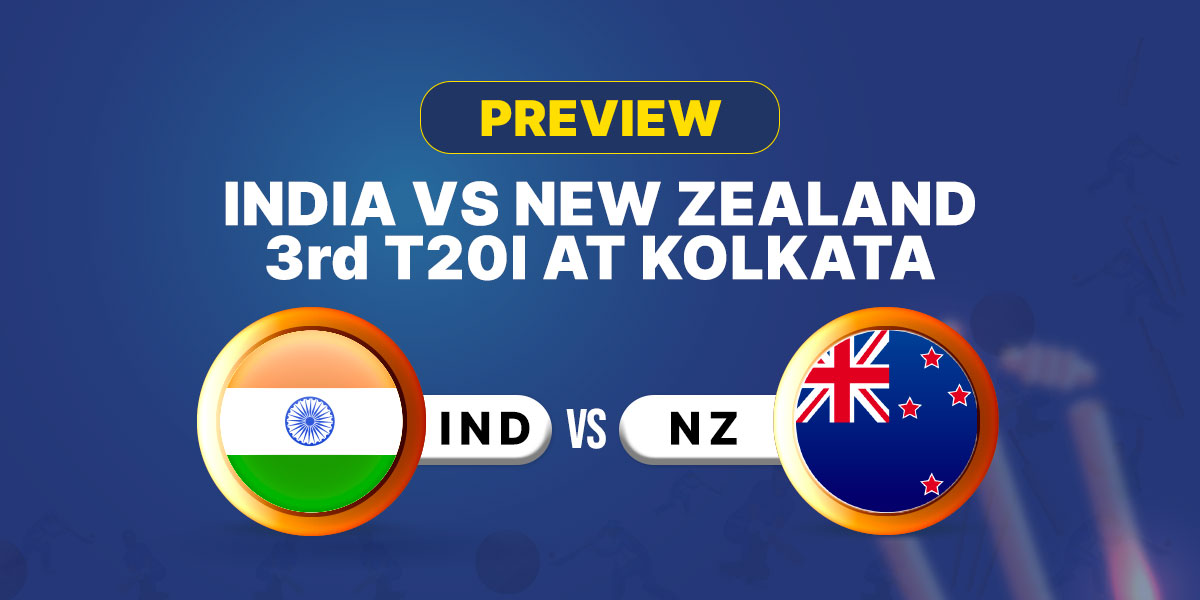 The series between India and New Zealand has been dominated by batsmen from both the teams. The top order stars in India such as KL Rahul and Rohit Sharma have been able to make a strong mark on the series, something that was not witnessed in the first two matches of India's campaign in the recently-concluded World Cup from which the team failed to make it to the semifinals round. On the other hand, New Zealand will seek and expect more runs from Martin Guptill, who has been in terrific form. Mark Chapman, Daryl Mitchell and Glenn Phillips are the other key batsmen in the New Zealand side. For this contest which will be played at the Eden Gardens in Kolkata, adding more to the fast bowling strength along with having a long batting tail will be the right approach.

India are strongly gaining ground in their bilateral T20 affair with New Zealand. At one stage, India were totally dominated by the Kiwis in the shortest format of the game but that is not a thing of the past now. India have recorded two consecutive series victories over New Zealand, producing remarkable all-round cricket as was witnessed in the second game of the series at Ranchi. India made a strong comeback with the help of the bowlers after New Zealand got off to a flying start, and did not show any discomfort with the bat to thrash New Zealand by 7 wickets to take an unassailable 2-0 lead in the series. India are certainly the stronger side in the tournament and should have more players featuring in the playing fantasy XI.

MORE INFORMATION: New Zealand will be keen to make amends particularly with the bat and ensure that they are not handed a whitewash in the third and final T20 which will be held on Sunday at the Eden Gardens in Kolkata. If India goes on to win the game on Sunday night, it will be their 8th win in the last 9 matches against New Zealand in the shortest format, even though the Kiwis have been on the winning side in the matches of Cricket events which have hurt India the most.

Players’ form: Both India and New Zealand have the top order firing on all cylinders and they would want their middle order to chip in with big contributions as well. New Zealand were sprinting at one stage before India fought back with the key wicket of Guptill in the second T20 tie to pull things back in control. On the other hand, New Zealand were able to make inroads and take as many as three wickets in a cluster when Tim Southee struck after Rohit Sharma and KL Rahul put on a century stand in the second game at Ranchi. Ravichandran Ashwin carries a big threat to the New Zealand side and so does all-rounder Harshal Patel and Venkatesh Iyer to an extent.

Changes in squad (if any): NO

For many, this India versus New Zealand series might not carry great significance or relevance especially given the fact that the Kiwis have got better of the Indians in each of their last three Cricket meetings, dealing severe blows to the hopes of billions of fans.

New Zealand ousted India from the World Cup 2019 handing them a crushing defeat in the semi-final, and followed it up with a one-sided contest of sorts in the final of the World Test Championship earlier this year. Last month, New Zealand dealt a body blow to India's hopes of advancing to the semifinals round of the T20 World Cup in the United Arab Emirates by crushing them with a margin of 8 wickets, even though the story of the recent bilateral affairs tells a different tale.

In 19 matches that these two teams have played so far, India have recorded 7 victories in the last 8 matches. India won the away series in New Zealand in early 2020 by a heavy margin of 5-0 whereas they now have a lead of 2-0 following a commanding victory at Ranchi on Friday night in the second match.

India did extremely well to overcome all sorts of challenges that conditions at Ranchi and New Zealand produced in their way. India fought back incredibly well with the ball to pull things back in control against New Zealand, who were scoring at a rate of 10 runs and over at one stage. By allowing a little over 80 runs from the last 14 overs, India had sealed the fate of the game which was later on dominated by their batsmen Rohit Sharma and KL Rahul who added 117 runs for the opening wicket.

India will be pleased with the result given that they have in a way avenged their defeat to New Zealand in the World Cup, but there is still a long way to go for this Indian team. It remains to be seen if India's middle-order can still put up a fight in case Rohit and Rahul do not perform, and it also remains to be seen what kind of totals India can set themselves if they are asked to bat first, since the coin toss has heavily influenced the outcome of matches in recent times.

New Zealand cannot feel that they have done anything wrong but it is just that luck has not been on their side in the last two matches. The conditions dominated by dew were extremely challenging for the Kiwi bowlers who could not keep a control on flow of runs for the majority of the innings.

New Zealand will certainly need Guptill to bat long and big along with the likes of Mark Chapman, Daryl Mitchell, Glenn Phillips and Jimmy Neesham in order to put up a strong total on the board.