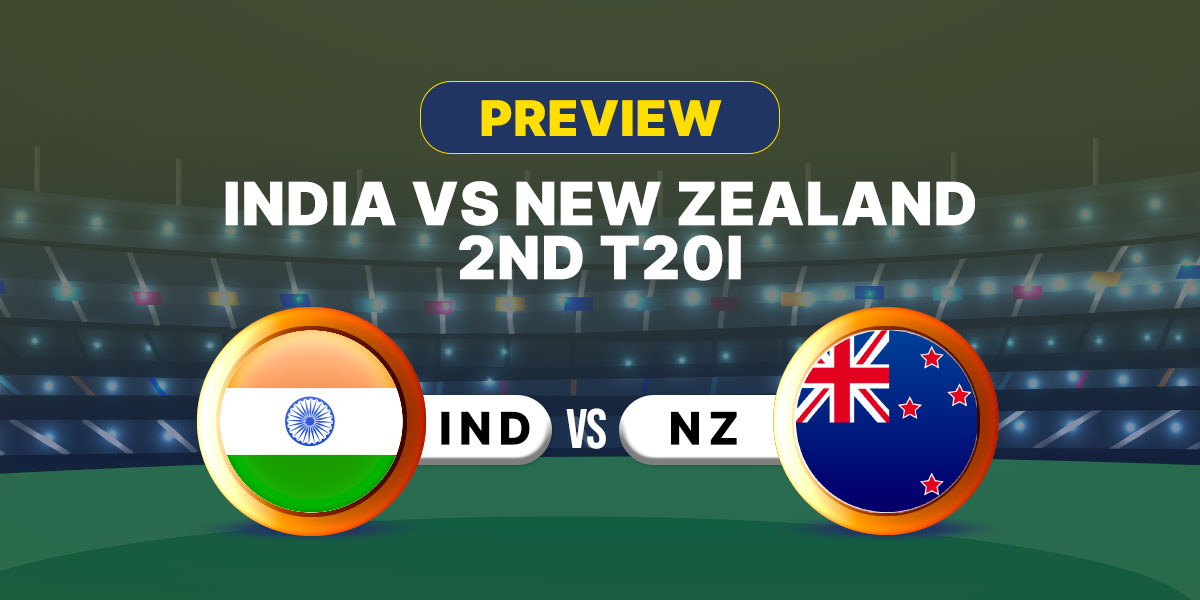 Both India and New Zealand will be keen on exploiting the conditions that are on offer across venues in this T20 international series. The first match at Jaipur witnessed both the teams comfortably going past 160-run mark but which was not the trend in the T20 World Cup that concluded a few days ago. Both these teams have plenty of batting firepower in their ranks, even though they are without their regular batting stars in Virat Kohli and Kane Williamson. Adding more to the batting front while packing plenty of options for spin bowling will be the right approach for this contest to be played at the home ground of former India captain M Dhonii.

India still have a couple of more wins to record in order to equal New Zealand's figure of nine victories in bilateral affairs. The victory for India on Wednesday night was their 7th while New Zealand have registered nine victories. Even though New Zealand have historically dominated India in the shortest format, the team led by R Sharma can be expected to come good and dominate the Kiwis who are depleted, having rested some of their key players in Williamson, Kyle Jamieson and a few others. India showcased their all-round strength in the first match and they should be considered the favourites going further into this series.

MORE INFORMATION: While this will be the first time New Zealand are playing a T20 international at the Jharkhand State Cricket Association Stadium Complex in Ranchi, India will be looking to consolidate their impressive record at this venue. India has so far played two matches in the shortest format here, defeating both Australia and Sri Lanka in these games. New Zealand will be keen to keep the series alive after having lost the opening game on Wednesday night by a margin of 5 wickets.

Players’ form: A lot of players from both the camps impressed in the first match of the series on Wednesday night. For India, Suryakumar Yadav top scored with 62 whereas R Sharma was unfortunate to have missed out on a deserving half-century by only two runs. Even though his stay in the middle was short, KL Rahul looked in good form with the bat. India will also be pleased with the way Ravichandran Ashwin has been able to make a comeback in the format, the same can be said for senior fast bowler Bhuvneshwar Kumar. For New Zealand, the biggest positive was the return of Mark Chapman and a brilliant half-century by Martin Guptill, even though their bowlers could not make an impact strong enough

Changes in squad (if any): NO

India look to seal series in Ranchi against New Zealand

Having taken a vital 1-0 lead in the three match series, India will be keen to record a victory on Friday night against New Zealand at the home ground of their former captain and mentor MS Dhoni, at the Jharkhand State Cricket Association Stadium Complex in Ranchi.

If India are able to record a victory in Ranchi, it will be for the second consecutive series that they have clinched victory over the Kiwis, who have remained one of their most formidable and fearsome opponents. In early 2020, India had blanked New Zealand 5-0 in their own backyard to mark their revival in bilateral affairs, which were predominantly dominated by New Zealand until then.

If the last matches are anything to go by, India have won 6 out of 7 that these two teams have played since the start of 2020. The only match which New Zealand won was in the World Cup, handing India a loss that proved too difficult to handle as it eventually took them out of the race to the semifinals.

Nevertheless, with a new leadership pair in place and coaching staff taking up their responsibilities under the guidance of former India captain Rahul Dravid, India will be keen on making most of the opportunities that they get with the next T20 World Cup being only 11 months away.

India had a near perfect outing in the first match even though there were some late hiccups in the chase. Barring a 109-run partnership between Martin Guptill and Mark Chapman, India were able to keep a lid on the New Zealand batsmen who can turn on the heat in a matter of a few balls in any given situation.

India should also be pleased with the fact that they handled spin bowling better than the New Zealand batsmen. After all, it is only a misbelief that Indians are better players of spin bowling, something that has been proved otherwise many times in the past.

India handed debut to young all-rounder Venkatesh Iyer signalling the fact that they are ready to move on from Hardik Pandya, who has been struggling for both form and fitness for a very long time. India must be looking for specific players for specific roles as Nos 5, 6 and 7 are important players in any T20 side and no team can afford players who are not able to deliver for a long time.

New Zealand will be taking out lessons from the defeat in the first match and would look to implement in the second. The Kiwis will certainly want to play an aggressive brand of cricket particularly with the bat, putting up scores in excess of 180 and then testing India's skills in case they get to bat first again.

Even though Williamson is not available for the series, Chapman did not make anyone feel his absence with a splendid half-century in the first match.  The left-handed batsmen will be expected to continue along with all-rounder Daryl Mitchell, who has rapidly established himself as one of the most important players in this New Zealand side.