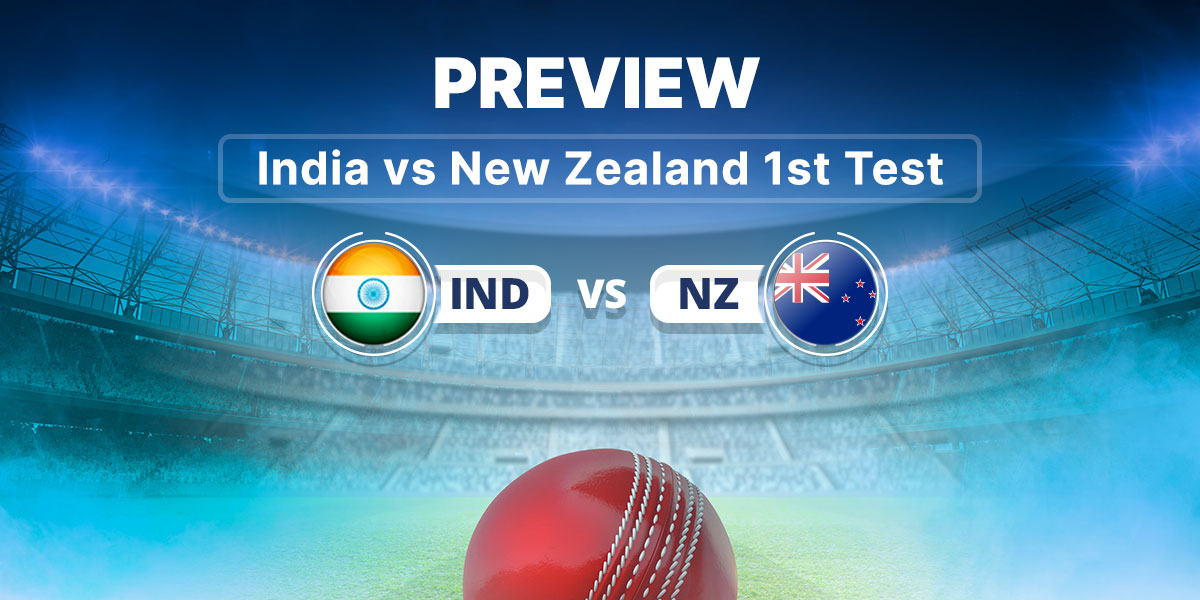 The conditions will be bright and sunny on the first four days of the opening Test match between India and New Zealand in Kanpur. The fifth and final day, provided the contest goes that far on Monday, November 29, there will be some scattered clouds around. The temperature will remain at an average of 27°C with humidity level ranging between 85 to 90% on all days.

India New Zealand will resume their rivalry in red-ball cricket on Thursday when they take the field for the opening Test of the two matches starting at the Green Park Stadium in Kanpur. This series is a part of the World Test Championship cycle 2021-23 and every match is going to be extremely crucial for teams to earn points and make strides towards the top of the points table. The series is expected to be played on spin-friendly wickets, with batsmen getting to dominate the proceedings for about the first couple of days of the match. Picking plenty of spin options along with batsmen who will deliver, is the right way to go in making the fantasy cricket playing XI for this contest.

New Zealand undoubtedly are a formidable unit which is nearly full strength compared to this Indian side, as the hosts are missing plenty of its important players including captain V Kohlii. Kane Williamson and Kyle Jamieson are coming back into the New Zealand fold after sitting out of the T20 international series which India won 3-0. New Zealand have won each of the last three matches these two teams have played in the conventional format, which also includes a spectacular win in the final of the World Test Championship 2021 at Southampton. While New Zealand have plenty of talent and options to pick from, India are still expected to dominate the proceedings given that they will be playing in their own backyard which supports spin bowling and they have two world-class bowlers Ravichandran Ashwin and Ravindra Jadeja to pick from.

MORE INFORMATION: India and New Zealand were the two finalists of the inaugural edition of World Test Championship and they are back again on the field in the new edition of the red-ball competition. While India will be comfortable going into the contest even though they are without plenty of their first choice players, it will be New Zealand who will be put through a stern test in alien conditions which they are not familiar with, irrespective of the exposure that they have had while playing cricket in India, including in the Indian T20 League. The pitch at the Green Park stadium in Kanpur is expected to be low and slow and favourable to spinners, which means that New Zealand will be dependent on the battery of spinners in Mitchell Santner, William Somerville and Ajaz Patel to come good. Williamson will be expected to lead from the front with the bat and improve his mediocre record in India, in which he averages just over 35 in seven Tests with only one century and three fifties to show.

Players’ form: New Zealand will be without the services of Devon Conway which means Daryl Mitchell can get a look in for the opening Test match. Williamson was in rich form in the World Cup and he will be expected to lead the New Zealand batting lineup with example., For India, it will be crucial that they continue to deliver on the promise and not be over dependent on the spin bowlers to get a victory from this match. The inclusion of Shreyas Iyer in the Indian batting line-up has strengthened the hosts, who are without the big guns in Kohlii and R Sharma for this match. India will also expect big contributions from their senior pair in Ajinkya Rahane and Cheteshwar Pujara, who have been struggling for big scores for a very long time now.

Changes in squad (if any): YES

Plenty will be at stake for both India and New Zealand when the two teams take field at the Green Park Stadium in Kanpur on Thursday for the opening Test of their two-matches series, which is a part of the World Test Championship cycle 2021-23.

India and New Zealand last met in the summit clash of the WTC final 2021 at Southampton, with the Williamson led side reducing incredible cricket in a rain-truncated match to emerge victorious and grab their first ever Cricket trophy. India certainly were not up to the mark when they faced New Zealand last time in Test cricket, and they will be expected only to come good with the learnings from the devastating loss in June this year.

Indian batsmen flopped miserably against the discipline shown by New Zealand's attack at Southampton. While the home team's batsmen could not be facing such challenging conditions to bat in and a tricky bowling attack with it, they still will have to prove their mettle in absence of key batsmen such as Kohlii and R Sharma.

Shubman Gill is expected to team up with Mayank Agarwal at the top of the order since KL Rahul has moved to Bangalore to rehabilitate and recover from a muscle injury to his thigh. R Sharma has been rested from the series and Kohlii will not be available for the first match in Kanpur, which means that the likes of Rahane and Pujara will have to contribute heavily in case India has to dominate New Zealand in all departments.

India's stand-in captain Rahane has confirmed that middle-order batsmen Shreyas Iyer will be making his Test debut at Kanpur, even though the team had picked up Suryakumar Yadav as a backup option for Rahul. Wriddhiman Saha will be expected to keep wickets and KS Bharat to remain his understudy.

The bowling department which carries the biggest promise for India in the series. India have three extremely potent spin-bowling options to pick from in Akshar Patel, Ravichandran Ashwin and Ravindra Jadeja. Each of these three can contribute with the bat in favourable conditions. While there is no Jasprit Bumrah or Mohammad Shami for the series, the senior and experienced Ishant Sharma and Umesh Yadav carry the responsibility of the fast bowling attack with Mohammed Siraj in tow.

New Zealand will be keen to put out their best performance since they have been at the losing end more often than not as far as playing Test cricket in India is concerned. The last time these two teams played at Kanpur was five years ago, in 2016, with New Zealand getting hammered by a huge margin of 197 runs.

Williamson and Kye Jamieson are back from resting from the T20 international series but there will be no Trent Boult for the Kiwis in the series. Neil Wagner’s doggedness will be at the fore along with that of the spinners, who are up for a tough ask over the next two Tests.